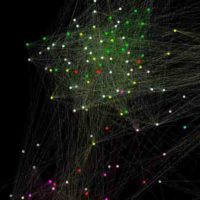 An Organisation from a Dynamic Network Prespective

In this post a different perspective on a innovative organisation is presented. We are used to look at organisations from a process point of view, but this way of observing organisational behaviour can additionally give information about how co-operations or conflicts between innovation clans (that often correlate with departments) develop.

This information can be presented dynamically, not just on isolated static moments.

This is the behavior of a real organisation that was much focused on innovation and deliver product concepts to the development in the business. Every dot is a person. The color indicates to which department, the person belongs. The most important departments are the ‘Red’ cluster, a ‘Green’ cluster,  a “Yellow’ cluster and somewhat later a “Blue” cluster.

The closer the dots are positioned amongst each other, the more interaction is reported. Interaction is measured a 1 (=is happened) or a 0(=has not happened). The frequency or time is not measured, only yes or no.

Please click on the picture. It will show you a video taken from the screen in the Gelphi environment in which the data is loaded and transferred into a video.

A 4 year time period is compressed into a video of 1.44 minutes.

From 0.08 you see Yellow moving and at 0.34 moving out of scope. This was a group that was developing, but in another part of the organisation a similar group developed and they were put together and left the organisation, but we see them coming back at 0.44, since management decided to have the total group move to this organisation again.

The fact that Yellow keeps at a distance of the rest is due to mistrust between the Green and Red cluster and the Yellow cluster. The Yellow cluster had a totally other
way of innovating and they were afraid that that would not be recognised by the management of the organisation coming forth from the Red and Green cluster.

In the mean time (more and more visible from 1.05 onwards) also between Red and Green tension increases (distances get bigger), becauses Red and Green were actually competing technologies. In the beginning Green was not seen as a serious replacement by Red, but that changed  around 1.05. It became clear to the Red cluster that the Green cluster gradually would take over the innovation lead to the business.

In the mean time a fourth cluster, a new system technology cluster, started to shape (Blue).

In the mean time the Blue cluster stayed dispersed and stronger group management was necessary to let the Blue cluster develop it’s own innovation focused instead of being used as only a support function to the Green and Yellow cluster. Tension between Green and Yellow remained until the very end. There is started to improve because innovation was needed that would integrate Red, Yellow and Blue. For that reason the mother organisation was strengthened to  a stronger cultural entity.