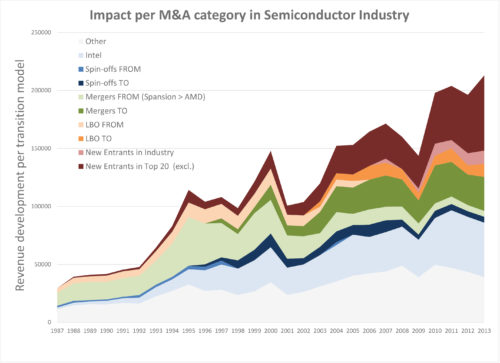 In this post, revenue development of companies with and without Mergers & Acquisitions are analysed amongst the top 20 in the Semiconductor Industry in the period (1987-2013). Often Mergers & Acquisitions are evaluated based on “short-term” financial impact. Here we try to get an impression of the longer term effects focused on growth in revenues. We are more interested in the long term revenue development of companies with an M&A somewhere in the period 1987-2013. So, we measure an integral effect of pre-M&A performance, M&A and post M&A performance.

Mergers & Acquisitions (M&A)  is a firm’s activity that deals with the buying, selling, dividing and combining of different companies and similar entities without creating a subsidiary, other child entity or using a joint venture. The dominant rationale used to explain M&A is that acquiring firms seek improved financial performance. Due to the scope of this analysis, financial performance amongst the top 20 are likely most improved by  (1) increasing economy of scale, (2) increasing economy of scope, (3)  increasing revenue or market share, (4) increasing synergy.

The restriction of M&A amongst the top 20 will hide a lot of acquisitions. Acquisitions are a normal element in this industry. “Eat or be eaten”. For example: from 2009 until 2013 Intel acquired Wind River Systems,McAfee,Infineon (Wireless),Silicon Hive,Telmap,Mashery, Aepona, SDN, Stonesoft Corporation,Omek Interactive, Indisys, Basis,Avago Technologies. Only Infineon will be mentioned in this analysis since it is a top 20 player.

The semiconductor industry has seen quite some changes in the last decades. Chart 1 shows the changes in revenues, but also in ranks and is used to visualize the stability in the industry

The chart was constructed in the following way.  For every year, the revenues of the top 20  are stacked from nr. 20 at the bottom  to  nr.  1 at the top. The green top line for example in 2013 is the total revenue of the top 20 earned that year.  The difference between the green and the orange line in 2013 (second from the top) is Intel’s revenue. The difference between the orange and the black line represents the revenue of Samsung.
Sometimes between the years cross-overs are present These cross-overs occur, when companies change position in the revenue ranking. For example the third line from the top (Qualcomm) in 2013 took over that position from Texas Instruments between 2011 and 2012.

In the period 1987-1995 the lines are quite parallel, ranking is more or less stable and growth is exponential. The only disruption of the ranking order  is Intel (green line), in 1992 taking over the nr. 1 position  from NEC Semiconductors. In 1996, the growth curve ends in a downturn. From now on the industry has to get used to a cyclic revenue pattern. Patterns that are typical for exponential growth systems hitting a constraint.  (See my blog on failing network systems)  or as business analists call it, the industry is in a consolidation phase.

Also the number of changes in ranking (the number of cross-overs)  increase as we are entering the 21th century. An alternative of the graph above is that we only consider the changes in ranks and keep the revenue data out. The picture then looks like Chart 2. The chart looks even a bit more messy, but this is caused by the many crossovers in the lower ranks. Although changes in ranks count as 1, the change in revenue under these lower ranks may be quite small and therefore less dramatic as may appear from Chart 2. For readibility reasons, we will use this chart to plot M&A.

A Measure of Industry Stability

One can express the level of stability in a distributed key parameter (i.e. revenue) over a set of actors over a period (i.e. one year) by a single parameter, let ‘s call it the stability index.

In Chart 3, the revenue stability index is shown over the period 1987-2013. One can observe, a cyclic pattern that suggests that the companies are influencing each other dynamically. Furthermore, also a trend is visible towards increasing dynamics. This should be no surprise for the incumbants of course. Additionally, the total revenue of the top 20 is plotted (red line). The correlation between the two curves is -0.45. The more revenue is generated from a consolidating market, the higher the instability. This phenomena is called “The Tragedy Of The Commons” (See my Blog (unfortunately in Dutch) “Het Managen van Grenzen aan de Groei” (“Managing Growth Boundaries”). In this case during the stage of exponential growth (in general a sellers market), the competitive interaction at the supply side is limited. As soon as, the market becomes a buyers market, competitive interaction at the supply side increases and this interaction together with the constrained market leads to instability.

Underlying Drivers of M&A in the Semiconductor Industry

The semiconductor industry shows a lot of mergers and acquistions. Partial acquisitions, where we lack data on the revenue of this acquisition, are kept out of the quantitative analysis. In Chart 4, the red lines indicate the M&A, that will be discussed. We have identified the following underlying drivers in our analyses.

In chart 10 per M&A category, the development of the revenue are presented. Spin-offs (blue colors). FROM is the total revenue of the parent organisations and TO is the total revenue of the new founded companies. The same format is applied to Mergers (green colors) FROM and TO and LBO (orange colors) FROM and TO. The “others” category is a mix of companies, from which we lack qualititative data on the M&A activity).

There were some new entrants in the industry between 1987 and 2013. Some of them succeeded to make it into the top 20. There were also new entrants in the top 20, but most of them started a decade earlier. They occupy nr.2,3 and 4 in the top 20 in 2013. The nr. 1,2,3,4 all started as semiconductor companies or were embedded in a component conglomerate, like Samsung. These companies have a culture and a managerial mindset for component business. The new entrants and Intel have grown substantially to 50% of the total – top 20- revenue in 2013. Most players in 1987 were conglomerates, where semiconductor activities where managed on the impact on corporate level and not on winning the semiconductor game. The companies that went into a spin-off, horizontal merger or LBO  are together delivering 25% of the revenue in 2013. Compared to the “new entrants”, we have to conclude that companies had to go through a deverticalisation process via spin-offs, mergers or LBO have been part of a consolidation trajectory with in absolute terms no growth between 1995 – 2013.

It is tempting to speculate about the underlying causes, so here are some hypotheses:

I guess statements of Derek Lidow, president and CEO of market research firm iSuppli in 1996 are spot on explaining the strategic M&A decisions leading to no growth.

“….. the chip industry itself has been unable or unwilling to take the hard steps necessary for consolidation. Many chip companies are run by engineers, who tend to think in terms of technology rather than of how best to manage a product portfolio….”

“The real leverage in this kind of a deal is to do portfolio management,” he notes, which means managing groups of products by market segment or geographic region, for example, rather than by technology category. “That’s usually not done in the semiconductor industry,”